The Secret to Growing a Thriving Business

If you’re hanging around in the same Facebook groups that I am, then you’ve seen a lot of the same crap I have seen recently:

UGH it makes me want to scream, and to be honest, I don’t believe half the posts anyways.

Trust me, I do believe that some of these stories are “potentially” true and I am not going to tell you that there aren’t people out there making six figures after only 3 months in business.

Although I firmly believe they are few and far between. But, yes there are some that exist, but it’s more from a mixture of luck and skill, than just skill.
You must know that these same tales have been told time and time again over the years to get people to pay them money.
Why? Because it works.

It’s the same deal with every weight loss product on the market.

When I get asked from my friends how I stay in shape I always answer the same way, I move more and eat less. But that just doesn’t sell in the real world. Even if it’s what works.

It isn’t sexy and doesn’t sell.

Instead it needs to be something like “Take this pill to lose weight while eating whatever you want!” Who doesn’t want to eat whatever they want? That is awesome, totally sexy, even though it is totally untrue.

And for us entrepreneurs, our version of “move more, eat less” is “work hard, be consistent, and know it will take time.”
So Boooooring. But soooo true.

Growing a thriving business takes patience, skill, and a lot of trial and error. (tweet this!)

It can be frustrating at times, it kind of feels like it’s taking forever, but the payoff is worth it. Think about what it gives you in the end.

For me growing a thriving business give me FREEDOM. Freedom to work from home. Freedom to spend the afternoons with my boys. Freedom to support others on their journeys. And for you it might be something else.

So don’t fall for those selling tactics that have been around since forever.

Make smart investments in your business, and stop looking for the quick fix.
xo

PS Are you part of my FREE Facebook Mastermind yet? Well, why the heck not?! Join my free community of high-achievers, the Power in Action FB group. It is an amazing environment of very supportive entrepreneurs. 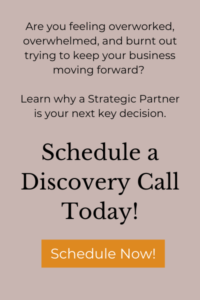